TELEPHONE: 01730-262685
Please note that we do not take credit or debit cards. Cash and cheques are welcome. 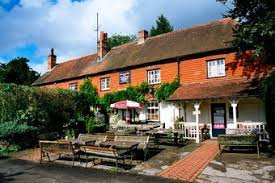 The Harrow Inn is a unique, family-run 16th Century village pub set in the Hangers of East Hampshire. It offers a range of ales, hearty home cooked food and a warm atmosphere throughout the year.

The pub has been in the same family since 1932. It is now run by two sisters, Claire and Nisa McCutcheon, both of whom were born and brought up there.

It has been included in the Good Pub Guide every year since the guide was first published, receiving a unique long-service award in 2002.

Other awards and accolades

We are delighted that we are once again featured in the CAMRA Good Beer Guide 2022 which was published in October 2021.

The Harrow is featured in Britains Best Real Heritage Pubs - also published by CAMRA - which has also identified the pub as having a 'nationally important historic pub interior'. Due to this it has recently been 'relisted' by Historic England as referenced in this BBC article from June 2022.

In 2022 we were awarded a 'Certificate of Excellence' by Restaurant Guru one of the world's most popular foodie websites with over 30 millions monthly users.

The Harrow was named as "Unspoilt Pub of the Year" in the 2018 Good Pub Guide, the fourth time it has won this award (the first time was in 1996) and the third time under the management of Claire and Nisa who took over in 2004.

The Harrow was ranked at number 321 (for it's Cheddar ploughmans) in the Lonely Planet "Ultimate Eatlist - the Worlds Top 500 Food Experiences" published in August 2018.

The Harrow is one of only three "authentic pubs" listed in Alastair Sawday's "Guide to British Pubs - 2007".